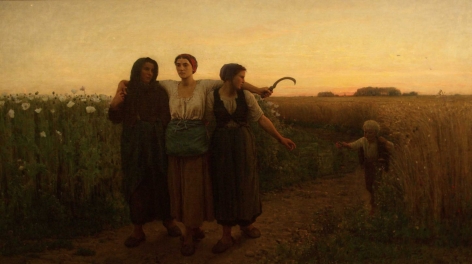 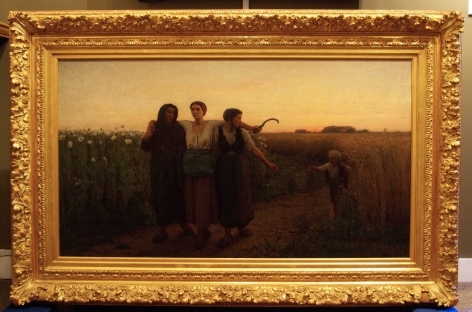 A painter of peasant landscapes, highly regarded across Europe and America, Breton was one of the most celebrated artists of his generation.  He was strongly influenced by Millet and the Barbizon School, but romanticized the peasants and concentrated on more idealized compositions.  He studied with Felix de Vigned in Ghent, Wappers in Antwerp, and Drolling in Paris.  He first attempted genre, but later took to landscape, scoring his first major success with The Return of the Harvesters (1853).  From 1855 until the end of the 1890s, his representations of the peasant women of his native Artois earned him prominence as a major interpreter of French rural life.  Breton’s depictions of joyful labor, bountiful harvests, restful moments of contemplation, peasant celebrations, and long-practiced religious customs offered a vision of rustic beauty by turns gay and cheerful, grave and melancholy, but always serene, harmonious, and imbued with poetic sentiment. Awarded France’s highest medals for achievement, Breton was also a noted poet and author.