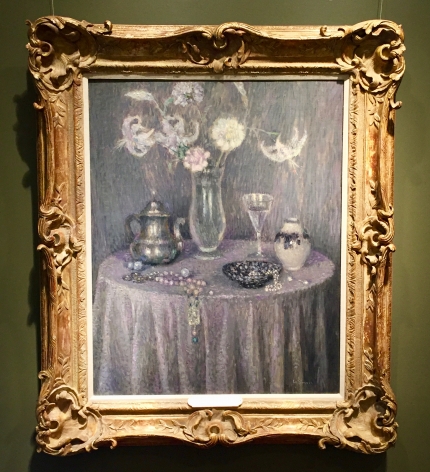 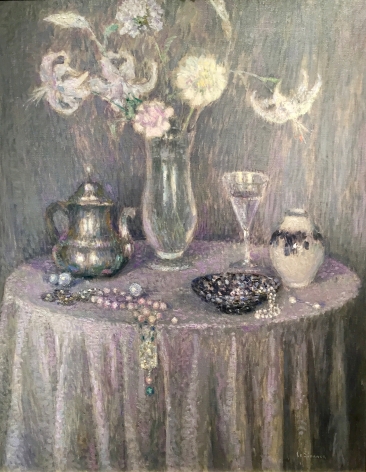 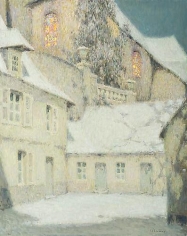 Henri Le Sidaner (French 1862-1939) After spending the first years of his life in the West Indies, Henri Le Sidaner returned to France with his family in 1872. He began art studies in 1877 with history painter Alexandre Desmit in Dunkerque and in 1882 entered Alexandre Cabanel’s atelier at the Ecole des Beaux-Arts in Paris. From 1882 to 1893, Le Sidaner often retreated to Etaples. The stern coastal landscape of the northern town appealed to the young artist, who suffered under the Ecole’s dictum of copying pictures in the Louvre. Le Sidaner explained that “Etaples—that is to say, Nature—revived me,” and that city provided many themes for his plein-air works.

Le Sidaner began exhibiting at the Salon des Artistes Francais in 1887. His naturalistic figural groups set in Etaples were well received and won him trips to Italy and Holland in 1891. Three years later, he exhibited Impressionists works influenced by Monet at the less conservative Societe Nationale des Beaux-Arts. From around 1896 to the end of the century, Le Sidaner painted Symbolist themes in which pensive, virginal women dressed in white inhabit dimly-lit gardens. In these paintings, which recall the early canvases of his friend Henri Martin, Le Sidaner initiated the aura of mystery and the divisionist technique characteristic of his late work.

After the turn of the century, Le Sidaner rarely portrayed the human figure. Instead, he depicted provincial setting in Bruges, Beauvais, and Chartres and urban areas such as London and Venice. Images of the gardens and interior of his home in Gerberoy, where he resided from 1901 or 1902, also are prevalent in later works. He did, however, often imply human presence in a set table or an open book, adding to the intimate yet mysterious quality of his painting.

Like his close friends Henri Martin and Ernest Laurent, Le Sidaner was associated with Neo-Impressionism only tenuously and tempered its techniques with an otherwise traditional approach. He enjoyed continued favor and from 1897 was regularly honored with solo shows not only in Paris, but also in London, Brussels, and the United States. In 1930 he was made a professor at the Academie des Beaux-Arts, replacing Ernest Laurent, and in 1937 was named its president.